I know it sounds silly but I really love our chickens. I love my dog no doubt, but the girls are a lot of fun and pretty cool despite all the work. They’re a part of life that gives me some big payback. I’m sure it sounds weird, but I have become attached to three of them in particular.

There is Daisy Dillon of course…

Then there are Roberta and Harriette,

who were the intrepid explorers in the group.  Always together they both were born in 2005 and had the most seniority in the coop. Harriette was named for my friend and college advisor.

Harriette died today. We just went out to the coop a few moments ago to let the girls run for a bit and she was lying in the dirt as she always does looking like she had been enjoying a dirt bath when her life ended. She was like a house pet. She would follow all of us around, even Douglas. She ate from our hands and often wanted to come in the house (the above photo was a rare occasion when she and Roberta managed to get past the guard. It may seem silly to miss a chicken but I think I will. 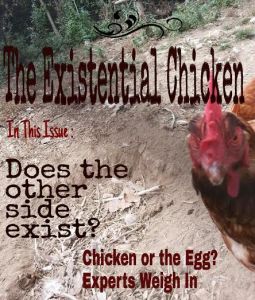 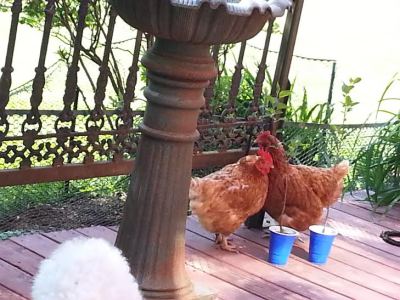 LINKING UP WITH MARCIA FROM BLOGITUDES. THE CUES WERE SMALL AND TOGETHER.