L.o;p;oj’bl’;;hlko.nvuc  So Doug just walked across the keyboard. 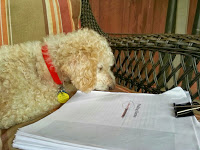 I know there has been evidence to the contrary but Doug isn’t really all that literate.  He’s fairly sarcastic but, no opposable digits kinda cramps his typing mojo.

Doug is losing his hair at an amazing rate. He is very old and apparently such things happen to old men of all breeds. That being what it is, he has some skin issues if we don’t stay on top of it. His skin is a soft, lovely pink because he gets a bath once a week in the colder weather and twice in the summers. This week we kicked off twice a week poodle baths. Luckily, poodles are water dogs. You know that silly haircut on poodles? The shaved thing with all the puffs? That is to keep their joints warm and also make them more boyant. The tail puff on the end is sort of like an up periscope thing. Anyhow… Dougie is very much poodle and loves the water. He is a lot more active after a bath as well which is always fun. 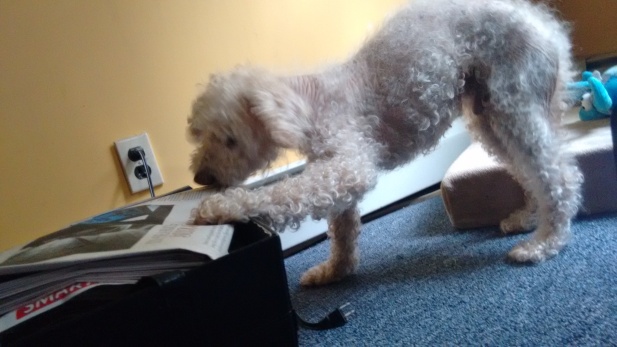 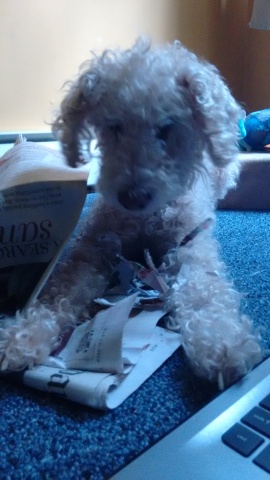 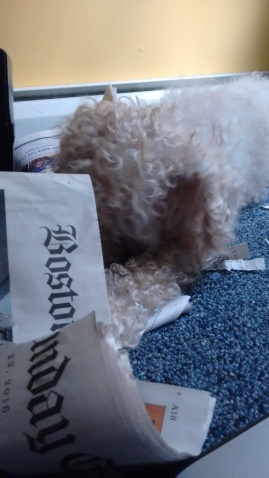 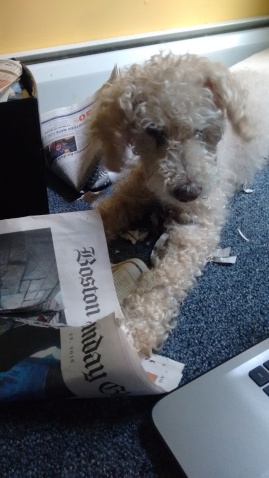 I had a very early start today. I normally don’t have Saturdays off and am still trying to adjust to my new schedule. I still have quite a bit of paperwork to do despite days off or on. Either way, what a luxury to have a Saturday off. I was at the grocery store at 6am and off to purchase an air conditioner at 7. When I got there the air conditioners were non-existant. Another customer heard me ask the associate where the AC units were located in the store and he said that he had gotten the last one (the associate said that was true.) I am usually pretty accepting at times like that… I mean , why gripe, what can you do? I thanked him for telling me and did the oh-well shoulder shrug and turned to leave. He put the AC in my cart and insisted he had a store on his way home that he planned on stopping at anyhow and I should take his AC. WOW! AMAZING! I wanted to kiss his feet! I didn’t, but still!

Doug is also quite happy with a cooler house and seems to have settled in from the past few days of having some increased agitation which I guess may have been associated with the heat. Have you ever walked into a barn in the summer? It’s pretty humid. I live in a renovated barn, so even if you’re a balding poodle it can get oppressive. SInce it’s cooler inside, when he’s outside, he has picked up speed, and is no longer crawling around the yard like an exhausted turtle.

A bit more gratitude spared for the return of the green.

Remember last week (probably not) when I said I had a family thing on Sunday and we made cookies but my computer wouldn’t download the photos? Here they are and one of my favorite boys and his wife… It was an all around nice time with many great-grand children and almost all the nieces and nephews… it was really nice for my mom to see everyone all in one place which doesn’t happen more than a few times a year at most. I am grateful that we are able to do things like this as much as we do which I realize is more than most families. If you’re in my inner circle you will hear me complain about having to do things like this, but this one was really nice. 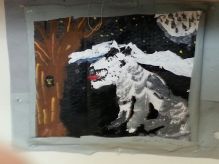 I have a few paintings from a man I chat with on occasion. He has a developmental disorder which makes the fact that he paints such amazingly lovely pictures, even more special. I have met him in my travels on some of the streets I peruse around my office. I can’t even tell you how much I treasure those paintings.  He painted another one for me and had been waiting weeks to give it to me. It’s fabulous. Again my computer is acting up but I do have my favorite in the media library of the blog so I will post it…. he painted it after meeting Doug. It’s a wolf-poodle because “…all dogs are part wolf.”

I’m grateful for some other stuff this week that’s a kind of mixed bag. I will fill you in a bit later…Have a great weekend!

OH HEY I FORGOT! THERE’S A NEW CONTEST! EVEN YOU CAN DO IT, CLARK! GO CHECK IT OUT ,CUZ IT’S SHORT LIVED… DONE ON THE 14th.

A Fly on our (Chicken Coop) Wall, Amycake and the Dude, Considerings, Finding Ninee, Getting Literal, I Want Backsies, The Meaning of Me, Thankful Me, Uncharted, The Wakefield Doctrine